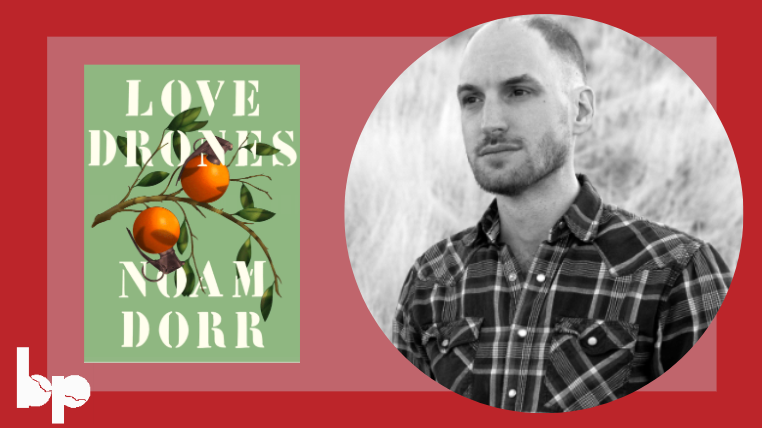 Noam Dorr has been published in Gulf Coast, Seneca Review, Passages North, and other places. His essay, “Love Drones,” won the Gulf Coast Essay Prize and was a notable essay in the Best American Essays 2016. Born and raised in Kibbutz Givat Haim, Israel, he is a former Fulbright scholar, and received his MFA in Creative Writing from the University of Arizona. Dorr is currently a doctoral candidate in the Literature and Creative Writing PhD program at at the University of Utah and the nonfiction editor at Quarterly West.

Briana Rooke & Emily Turner: Your gripping book Love Drones is on Poets and Writers “New Nonfiction 2019” list, and If you could pick one phrase or idea from your book for readers to take away, what would that be?

Noam Dorr: That’s a nearly impossible task! But I will say that the book proposes that if we want to change the relationship between violence and intimacy in our lives, we need to rethink the stories we tell ourselves, and how we tell them.

ND: I’m so glad it seems effortless, because in truth it was incredibly difficult! Even before the interweaving there were many challenges just in terms of choosing which parts of my military experience to include, mostly because when discussing the intelligence work, I had this inner censor who kept saying “you can’t share that, that’s a secret.” So, I had to get over the initial hurdle of potentially exposing confidential information.

In terms of the interweaving, what I would recommend to creative nonfiction writers is to not get bogged down by the stories we repeatedly tell ourselves. We often have a particular way in which we braid biographical details into the narrative of our life experience. Think of going to a party and meeting someone there for the first time who asks you about where you grew up and what it was like—I think many of us have some rehearsed version, a sequence of events we’re comfortable telling. But when we approach the essay it’s important to let go of some of those key life moments in favor of the unexpected details that highlight the subject of the essay itself. So, the struggle isn’t to make sure a reader gets a complete and exact depiction of the writer’s life, so much as to find the moments that illuminate the topic we’re looking at.

Then there’s the unglamorous, but absolutely crucial, act of research. One of the advantages of using personal experience is that those moments already have a built-in emotional resonance, so it’s relatively easy to understand what we’re trying to go for by introducing in our writing something we have personally seen or felt—I know what it felt like to have been on guard duty, hear explosions, and the anxiety of not knowing whether they were fireworks or gunshots. But if we’re interweaving personal experience with researched sections then we have to go deep to really tap into the emotional weight of those events we didn’t witness personally. Wikipedia just doesn’t cut it. So, I frequently find myself reading entire books, or watching whole documentaries, sifting through archives for information that in the essay makes an appearance in maybe one or two sentences. But that’s part of what it takes to have moments that aren’t just “check out this cool thing I found out!” but instead have an emotional weight equal to or greater than the personal history part.

BR & ET: Have you felt any correlation between the experiences in Israel that you spoke about in your book and the current political climate in America today?

ND: I think there are certain parallels we could draw in terms of the vitriolic rhetoric that’s being deployed around national narratives and who is being bullied in or out of them, whom is included or excluded. In both places those narratives allow for a silent creep of surveillance practices and government sanctioned violence (like drone warfare or militarized police forces) where we might not notice the pattern at first. With Love Drones the challenge for me was to take a step back and see how the events we’re witnessing are not just part of the expected narratives of political struggle, but part of something deeper—how these events influence our most intimate relationships with each other.

There’s an Alberto Ríos poem (I used a line of it as an epigraph for the book) where he writes about how when something explodes everyone is already looking towards the explosion, but who is looking the other way? Part of the meditation of this project was thinking through what it means to turn away from the explosion and seeing the moments that are missed when our attention is captivated by the bangs and flashes.

BR & ET: Your book discusses both intimacy and violence in profound ways. How did you convey such contrasting feelings in such an accessible way?

ND: I think one major way to bring these two contrasting feelings into conversation was through a willingness to be vulnerable—both in terms of sharing very personal details, but also a willingness to go out on a limb essayistically, seeing how deep I can go with this exploration without necessary arriving at a conclusive statement. That also required a rangy approach: the book explores the extent to which intimacy and violence are intertwined in both obvious technologies like national borders and intelligence surveillance, but also some we might not immediately associate with violent political practices, like citrus horticulture and dating apps.

All of those techs show us how human closeness and our capacity to hurt one another are linked. I think we try and extricate intimacy and violence, separate one set of practices from another—we might not want to think of our capacity for killing others through drone warfare as linked to our capacity to love. But they are culturally woven together in ways that we can’t easily disentangle.

A central framework for me in thinking through this was Anne Carson’s Eros the Bittersweet. Carson points to how in classical Greek poetry we see the erotic tension sustained through a triangular relationship: The Lover – The Beloved – And the Obstacle between them. Should the Lover and the Beloved overcome the obstacle and consummate their desire the tension is resolved. But how is that triangular relationship different from the one we see in drone warfare between The Pilot–The Target–and The Drone in between them? Or in intelligence surveillance with The Analyst–The Surveillance Target–and The Satellite watching over? Our intimate human relationships of desire and love are echoed in these technologies and the violence they inflict.

We might be drawn to say, “Oh, that’s only because we’re referring to erotic love. Other forms of love aren’t so insidious.” But we can also see the ways in which we love being used to justify the ways in which we inflict violence on others. There’s an essay by Ben Mauk, in which he points to how part of what allows us to bomb our enemies are the narratives we tell ourselves about our capacity to love—we bomb because we love and because our enemies can’t. And the project of the book was in many ways to explore the complications of that entanglement.

BR & ET: With how divided the world is today (some of which you discuss in your book), how would you recommend that people cherish intimate relationships in the midst of a culture of bigotry and hate? Is such a thing possible?

ND: I think we have the potential to bring intention to everything we do with one another. We don’t necessarily always know the consequences of our actions, but we know with what intention we approach them. My earlier answers might create the impression that I give love a bad name, but I actually do believe that if we approach our human connections (with both those we love and with strangers) with compassion and attentiveness then we have the possibility to truly transform them.

Part of that requires us to challenge the narratives we believe we’re entangled in. We can move away from hurt to repair, from guilt to responsibility, if we’re open to rethinking the stories we tell ourselves.

Briana Rooke is a Creative Nonfiction Editor for The Broken Plate 2020. Currently, she is a senior at Ball State University majoring in English Studies and minoring in Film/Screenwriting and Theatre. She also serves as part of the editorial team for Hope for Women magazine, and you can find her on Twitter @BrianaRooke.

Emily Turner is a Creative Nonfiction Editor for The Broken Plate 2020, and she is an English studies major with creative and professional writing minors. From a young age, Emily has used reading and writing to express herself, and with editing and revision she hopes to inspire others to voice personal truths through their writing.